Hey everyone.. today it was time for another one-pot meal. Was not really in the mood to make anything elaborate. So I made a quick Pulav with Chawli (also known as Lobia or Black-eyed Peas) and some mixed vegetables. 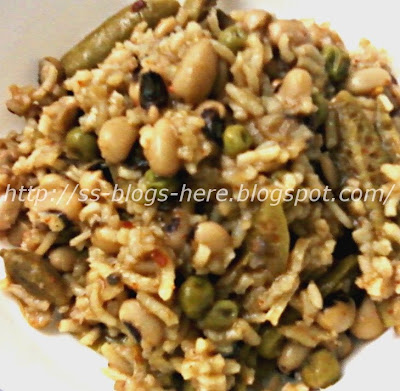 Fig.1 Chawli Vegetable Pulav
I often prowl on blogs and pick up ideas from there. But either by choice or because I don't have certain ingredients I often end up making many substitutions and variations. By the time I am done zippety-zapping in the kitchen it becomes very difficult to trace the ancestry of my dish and credit the bloggers of the original recipe without risking offending them! But really, if the dish tastes good the credit does go to them. See, I would never think about certain combinations if they weren't mentioned on those blogs first!

Such was the case today when I set out to make pulav. I always check out Aayi's Recipes for pulav ideas. Shilpa and Varada Aunty have put up tons of rice dishes there. Just one click on the rice label gives me an assortment of pulavs, biryanis and khichdis with pictures! And the lazy bum that I am, I don't even have to bother to think. I can just look at their ideas and incorporate them in some manner or other into my own cooking.

Shilpa's Methi-Avarekalu Rice recipe is the inspiration for what I have cooked here. I wanted something fairly filling, so I chose this dish. Loosely speaking, my dish is similar to Shilpa's recipe, but many of the ingredients and spices have changed. The fundamental concept here is from her blog. Adding beans to pulav!! Whood'av thunk! ;)

Fortunately despite all my changes this pulav tastes simply amazing!! Amazing enough that this is the second time I have made it and it is now time to record it on the blog. It would be truly worth your while to check out Shilpa's recipe too, my recipe is a fairly toned down version of hers.
Ingredients:
Rice - 1/2 cup
Black eyed peas - 1/2 cup
Frozen veggies - Tindora + peas ~ 3/4 cup
Cloves - 3
Cardamom - 3 pods
Cinnamon sticks - 2 small sticks
Jeera (cumin seeds) - 1/2 teaspoon
Bay leaves - 1 small
Red chilly powder - 1 teaspoon
Red chilly flakes - 1/2 teaspoon
Garam Masala - 1/2 teaspoon (optional, just for fragrance. Can use Amti powder, Sambar powder or some such South Indian masala.)
Tamarind paste - a small blob.
Oil - 1 teaspoon
Water - 2 cups to cook pulav, about 2 cups to cook chawli
Salt - to taste
(Note: Shilpa has used several other spices in addition to the ones above, onions, tomatoes, avarekal/val, methi. But I have skipped all the fresh items since I didn't have much groceries and some spices I did not have. I also did not have val, so I used chawli. Large white bean.. kinda-sorta-similar, I thought. I did not have methi so I used whatever spare frozen veggies I had in my freezer. I put a tiny bit of garam masala and convinced myself that the garam masala is good enough substitution for all the spices I skipped! ;) And God knows what inclined me to add tamarind. Felix Felicis told me it was the thing to do! Trust me, the result tastes terrific!! Best pulav I have made in the last few weeks!)
Procedure:
I used a microwave for the entire process, but I am not giving timing notations here.
1) Separately cook black eyed peas.
2) In a fresh pot heat oil and season jeera, cinnamon sticks, bay leaves, cloves, cardamoms, red chilly flakes.
3) Add frozen veggies. Heat till they are cooked.
4) Add salt, red chilly powder, garam masala, washed rice, tamarind paste and mix well. Heat.
5) Add cooked black-eyed peas. Mix well. Add 2 cups water. Heat till rice is cooked.
Taste it.. ! It's so good!! :) The beans in the pulav make it very filling. Perfect lunchbox item. No need for dahi or pickle either! Love it!! Will make it so many times again in future! Baap re.. do I sound excited or what! Haha! :D Nothing else here to eat right now and I just hogged on this!! It's the pulav talking.


This post goes to Nupur's One Hot Stove Blog-bites event, where she wants to see what variations we make to other blogger's recipes. Hope this works for your event, Nupur. Cheers!

I am also sending this post to My Legume Love Affair # 23 hosted by The Well-Seasoned Cook.
PS: I apologize for the slightly blurred pic, it's not your eyes! It's my awful, no-knobs, cell phone camera.
Posted by SS blogs here at 10:36 PM

What a great idea !!! Will surely try it out.

Delicious, nice to use black eyed peas this way

Looks like a satisfying one-dish meal. Thanks for the entry!

Lovely veggie puloa. Looks yummy and delicious. Thanks for sharing.

Thanks, Priya and Sushma. I thought the combo was a great find too!

Thanks Niloufer and Spicy Tasty!

Nupur, thanks for dropping by! Cheers!

Wow...Chavali could be used in such a way as wel...great to know this recipe...Nice blog .

Wow!! SS calling SS! :D Thanks for dropping by and for the kind comment, SS! I was quite thrilled to spot this combination too. Hurray for Aayis Recipes! :)

A delightfull idea on a wonderful site , u have so muc of deliciousness here:-))

If u have an Indian address, here are more than jus a few chances to win , a few goddies, ur sure to love or send to ur loved ones, lods of chances to enter ur name, for every chance , add a separate entry ie comment...all the best:-))

Black-eyed peas have a wonderful flavor. This dish is great ideas from many all rolled into one.

Thanks, SS, for your MLLA contribution!

Hey Susan, thanks for stopping by and many thanks for hosting MLLA. Cheers! 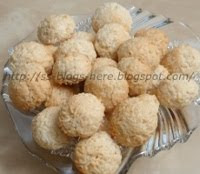 Obstacles are those frightful things you see when you take your eyes off your goal.
- Henry Ford